Sixty-eight climbers gathered together in Kathmandu on October 12th at Crimpanzee Adventure Hub, ready to try their hands, and feet, at the first Musa Masala wall climbing competition for beginners!

Bringing together ages 6 to 37, the Musa team wanted to provide a safe, fun and educational environment for entrants. And Crimpanzee was a perfect place to hold the event. Organized by the team at Wongchhu Peak Promotion, the first class experience created a lot of excitement for everyone.

The competitors were divided into three divisions: one for kids under 11, and one male and one female division. Awards, donated by our sponsors, were given for first through third place. We had a stellar group to support us, including outdoor clothing companies Scarpa, Camp Gear and Beal, as well as the Mulberry Hotel and the Nepali Ghar hotel.

We were honored to have the Nepali mountain clothing company, Nirvana Gear and its co-founder Binod Mani, donate the awesome shirt and leggings combo that each climber received at registration. Seeing the participants all in their special Musa Masala gear with all the sponsor logos and Wongchhu Peak Promotion logo was so awesome, and it added to the energy of the event!

Another great addition to the competition was our two judges. Mr. Lakpa Sherpa is the past head instructor at the Nepal Mountaineering Association. An incredible climber and teacher, we were so fortunate that Lakpa joined us. Our second judge was the up and coming climber who is well known for her speed climbing and both national and international awards, Panchamaya Tamang. Panchmaya worked with the Musa team from the beginning to help put the competition together. Having her on board helped in the formation of what we wanted to do, who we wanted to reach, and how to accomplish that.

The competition itself was kept on the rails by the team at Wongchhu Peak Promotion, Ang Diku Sherpa, Sonam Sherpa, Phula Sherpa, Ang Dawa Sherpa, Mingmar Sherpa, Sangita Rai and Roshan Shrestha. Roshan and Sangita also entered as climbers! Dome Sherpa worked on the organization as well, helped to belay climbers and starred along with Panchmaya Tamang in our promotional video!

The winners for each division are as follows. As each division came down to the final round the crowd support for each climber really brought together the fun and community we were really hoping to create for everyone.

The prizes for the winners in the mens’ and womens’ divisions included:

We want to thank our sponsors again for the prizes and support! Thank you to our awesome emcee, Sonam Jangbu Sherpa, who kept the competition rolling along and was a steady hand at the wheel to make it all happen. We also give our biggest thank you to the climbers, their families and friends who came out to this new event. We hope you were inspired to get to one of Kathmandu’s climbing gyms and have fun while learning a great sport.

During the competition, Lakpa Sherpa and the Musa team were asked by the co-sponsors and members of the climbing community to commit to creating a series of competitions to help grow the community in Kathmandu. We selected November 4th, 2023 for the next competition.

Watch the video interview here with the one and only Thom Pollard for more news!!

And check out Thom’s amazing YouTube channel for great mountaineering stories and news.

So we commit to building upon this first round and bring, in 2025, an international competition to Kathmandu. We hope this beginning contest will bring some of these same competitors from this first contest all the way to an international stage. Keep up with us, Wongchhu Peak Promotion and Nirvana Gears as we build this into a competition for everyone who wants to get up and go climb. 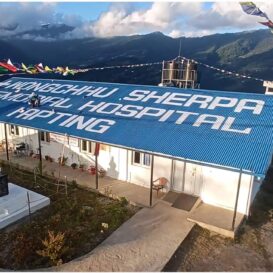