Gaëtan Lamarre is a documentary filmmaker from Canada. We at Musa Masala were lucky to get to interview him as he took his short film about the Khumbu Climbing Center, In the Shadows of Everest, around to film festivals. This film is just stunning. It captures the beauty of the Khumbu region and the village of Phortse in such detail. The story of how the center came about is fascinating. There is so much good stuff here. Read on then please watch the film at the link below and make a donation to the Alex Lowe Foundation. Enjoy!

Can you give us an overview of In the Shadows of Everest?

Phortse is home to more Everest summiteers than anywhere else on Earth. Sherpas who live here are the backbone of nearly every expedition to the summit of the world. Conrad Anker and Jenni Lowe-Anker founded the Khumbu Climbing Center in this Himalayan village to teach climbing skills that are vital to the safety of Sherpas during expeditions. From the construction of the KCC headquarters, at 3,800 metres, to Dumji, a Buddhist festival for the ages, these are the stories of Phortse.

How did this project start?

A few years ago, after returning from a trip in Guatemala, I remember having a bit of an empty feeling. The trip was amazing. The country and the people are just beautiful. But I felt a bit guilty about traveling and taking from people who are living with less than I do in Canada, without giving much in return. It’s then that I decided that my next trip would involve giving back to the people I was meeting along the way. So that was my initial motivation.

And Nepal has fascinated me since I was little. After hearing so much about the devastation in 2015 from the earthquakes, it was the right time to head over. In doing research for how I could help out, I sent a message to Renan Ozturk, a photographer who does really beautiful work in Nepal, and he pointed me in the direction of the Khumbu Climbing Center. I sent Jenni Lowe-Anker, the founder of the KCC, a message to see if I could help out.

As a videographer/photographer, the best way I knew to help was to put those skills to use by sharing the stories of the people to raise money for the communities there. And so I went over with just a camera and an audio recorder, with the goal of spending about 10 days in Phortse to shoot a short film there. I ended up spending just over 6 weeks in the region because I fell in love with the people of Phortse and the mountains that they call home, and saw that there was a much bigger story to tell.

Tell us a bit about the logistics of filming in Phortse, the Khumbu and some of the crazy things that happened.

Phortse and its people are incredibly beautiful and I’m so lucky to have spent time there. The monsoon was just starting to pick up when I got to there in June of that year and a lot of the climbers who work on Everest were home after working on the world’s tallest mountain. It was really special to be surrounded by so many legends of the mountain.

The rainy season also meant that there were very few tourists in the area. Life slows down in the monsoon, with the climbers back in town and the potato fields already planted, waiting for the rain. With that rain, the town exploded from the browns of the end of winter to the lush greens of the potato and buckwheat fields. This extra life everywhere around town matched the blooming of the KCC headquarters being built. But rain made for tricky filming conditions, I had to keep myself and the camera equipment dry, as best as possible.

One of the craziest things that happened to me was in the courtyard of the Gomba, the buddhist monastery in Phortse during Dumji, a festival you’ll learn about in the the film. One of the monks took me into the middle of the courtyard, in front of everyone in town. He was dressed as Mi Tsiring, the embodiment of long life, and we danced in front of everyone. It was powerful to get to live such a spiritual experience there.

Also, filming at an altitude of about 3,800 metres was a challenge for a kid from the western prairies of Canada. When I would walk up the trails to film a scene higher up in the village, a Phortse local would breeze past me with a 20 kilogram bag of rice on her back. All I had was my camera and I was out of breath. That was just a small example of the work ethic of the people there, working so hard every day, for things we sometimes take for granted in the west.

Another challenge was hard drive space. I underestimated how much footage I’d film and ran out of space over and over on my camera cards. With Phortse being isolated like it is, I’d have to hike down to the next village to try to find extra cards for my camera, and wasn’t able to back up my footage until I got home, weeks later! But I couldn’t stop filming; I needed to share the stories of Phortse with as many people as I could. This film became a tribute to the Sherpas of Phortse.

What is the goal of the film?

In the beginning, the goal was to make a short film to share with family and friends at home to inspire them to either donate to the Khumbu Climbing Center, or to visit Nepal and help out with their tourist dollars. The project expanded almost every day that I was in Phortse, because I kept meeting more people from around the village with inspiring stories to tell.

The goal has expanded as well, and instead of just trying to share the film on a small scale, I decided to share it with as many people as possible. The sharing phase started off with a fundraising presentation of the film in Edmonton where I live, which had just under 400 people filling a theatre, with every dollar from ticket sales heading to Phortse and the KCC. And now, the film just came back from a tour around the world.

Are you taking this to festivals?

The film is currently on tour around the world with the Vancouver International Mountain Film Festival (VIMFF) and also had screenings on the adventure film festival circuit, having been shown in Vancouver at VIMFF, in New Zealand at NZMFF, and a return back home to Nepal, in Kathmandu at KIMFF. It was an honour to get to share the film with so many people.

Are you looking towards a future project you would like to talk about?

One day I’d love to come back to Nepal to film another documentary. A second project with the KCC would be great, especially a film that can celebrate women in climbing. That’s a dream that I’ll be working to make a reality soon. I’m open to suggestions or collaborations as well! My full-time job is as a cameraman for a children’s television program here in Canada, so that keeps me happy and busy. There is another project in its very early stages that follows a stand-up paddler here in Canada who will be racing in what’s called the Yukon River Quest next summer, to celebrate the life of his sister who passed away in 2017.

The only thing I’d like to add is that the Khumbu Climbing Center is still taking donations here. I owe a lot to the people of Phortse for their amazing hospitality and generosity, and to Jenni and Conrad at the KCC for allowing me to share the story. I’ll be forever grateful for the experience and recommend a visit to Phortse to anyone who has the chance, you’ll fall in love. 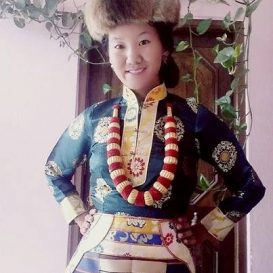