Brigitte Muir: From Summiting Everest to Empowering Women in Nepal

Thanks to our very own Hannah Dennison (who does an amazing job running the Musa Facebook page!), we’re honored to share with you all a piece written by Brigitte Muir, the first Australian woman to complete all seven summits. As you’ll see, her heart is at least as impressive as her feats.

Nepal is among the least developed countries in the world, with nearly 40 percent of the total population living beneath the poverty line. This situation is made more complex by significant gender, caste, ethnic and geographic disparities. However, by improving literacy, we can help families develop a better life.

In a world dwarfed by Chomolungma, Goddess Mother of the Snows, it is the warmth of good people that lights up hearts.

In Solu, which stands in the shadow of Mount Everest, lies the small subsistence farming village of Lura. Water has to be carried from the creek and firewood collected in the forest, work done by women and children while their men are away working or risking their lives as unskilled labour overseas or as guides on mountaineering expeditions.

Children can now get an education, either at a government school nearby or at a private school one hour’s walk away, across the valley. And although it is very basic, it is more than their mothers could get.

Electricity only recently arrived in Lura. Instead of huddling around smoky fires at night, families can now live if not more socially, definitely more easily with light for cooking, children’s studies and women’s classes. The villagers funded this! They are one motivated lot, and give community and looking after one another utmost value.

An enormous number of women in rural Nepal cannot read or write, which means they can neither teach their children nor play a useful role in local affairs, so that villages are denied 50 percent of the talent and wisdom they should be using to improve conditions. Without literacy, women have no access to written information, hence no power to make decisions, and they can’t even read letters from their absent family members.

In 1997, I became the first Australian to climb the highest peak on each continent, as well as the first Australian woman to climb Everest. In fact, I was on four expeditions to Everest before I reached the summit—four! These turned out to be a very helpful life lesson in keeping going when the going got tough, in the everyday life I faced once high altitude moutaineering was taken away from me. (That’s another story!)

I had the privilege to work as a climbing and trekking expedition leader with Sherpas in Nepal for many years. Sherpa, Tamang and other ethnic Nepali people have much to be admired for. They are incredibly tough, work bloody hard and laugh all the time, no matter how hard they work!

Beyond the Smile started as a question I asked myself: Who are these guys I work with, once the expedition is over and they go home to their families and communities? Do they smile at home, too? I had an opportunity to find out when one of the climbing guides I worked with invited me to come and meet his family, below the mighty summits of the Khumbu, in Solu.

I first visited Lakpa Tamang’s family and village in Lura in 2007. Since then, the question, “What is Beyond the Smile?” has grown into a film and a story still unfolding. It started a Tamang women’s education program, and a growing international tribe of people of all ages, living the adventure of life: The Friendily, Our Family of Friends!

Through fundraising on my website, and Well Being Well Doing Treks to Lura and its culturally rich landscape, I have been able to help the beautiful people of the Gyamdanda Community Forest (see below) help themselves.

We started in 2009, working with the Young Star Club (YSC); initial and advanced literacy programs devised by Dialogos, a Danish NGO were successfully implemented.

Then it was time to practice the newly acquired skills, with the very special Discussion with Family Members Program, designed by the amazing Sangeeta Shrestha of Slisha, a remarkable NGO based in Kathmandu.

Next, we looked at the Community Forest Villages. Lura, Roshi, Boldo and Arubot are the four villages that manage the Gyamdanda Community Forest. They have a five-year plan for forest management and devising a business plan with the villages, for the villages. It’s based on existing human and natural resources. Job creation and enhancement of resources are the next goals.

Water pipes sponsored by the last group to visit Lura—in October, 2014—brought water to the property of the Forest management Group in Lura. Some of the facilities were damaged in the April, 2015 earthquake, but that did not stop the villagers from tackling the next step: creation and construction of a greenhouse built from local renewable resources as much as possible. This is now used to grow tree seedlings to regenerate the forest. Volunteers (one at a time, to insure full immersion in village life and as little disruption as possible) have been staying in Lura to help document progress and help with hands-on projects. Australian school groups and trekkers have also helped at the school, especially after the earthquake.

As I worked each year as a trekking/climbing guide in Nepal, I was able to stay on, live and record the story as it developed in unexpected ways. This certainly has been a life-changing adventure for all concerned. Working on the Beyond the Smile documentary has made me realise that life as I know it in Australia is very different from life as I discovered it in a small village in Nepal. It has been a lifeline for me, a bridge taking me from personal goals such as climbing mountains, to broader dreams, encompassing going beyond the helplessness of the individual, towards the empowerment of belonging.

For more information on treks and ways to help, please visit www.beyondthesmile.net

With love and respect, 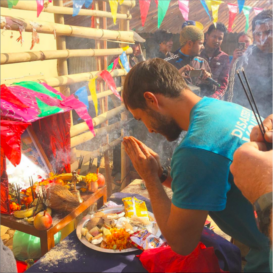