Hey everyone, we are bringing back one of our favorite and most popular posts, Sherpa Fashion, by Ang Diku Sherpa. This was one of our earliest posts at Musa Masala and it is sought out online for all the great details on the beautiful clothes worn during festivals and formal events in the Sherpa culture.

A lot has changed at Musa Masala since it was originally published. Now, Ang Diku is the General Manager of Wongchhu Peak Promotion. She’s also instrumental in the success of the construction and operation of the Wongchhu Sherpa Memorial Hospital.

Enjoy the post and contact us if you have any questions about Sherpa fashion and traditional dress. We will bring you more soon! Jam jam!!

My name is Ang Diku Sherpa. I live with my family in Kapan, Kathmandu. There are six in my family: Papa (Father), Aama (Mother), 3 vai (brothers) and, of course, I cannot forget my cute dog, Chindu.

I love my family and I am blessed to have them. I enjoy traveling, singing, dancing and much more. At the moment I am both studying and working for Peak Promotion Pvt. Ltd.

I came to Kathmandu when I was eight years old. My village is Chyangba, a beautiful village surrounded by many evergreen forests and wonderful mountains. My village is gradually developing, thanks to the hard work and enthusiasm of the late Mr. Wongchhu Sherpa. I really appreciate him for all he has done. I think everyone should visit Chyangba Village to see the natural beauties and the great work done by Wongchu Sherpa.

This is my first blog post for the small but mighty Musa Masala, and I’m eager to tell you a little bit about Sherpa women and give you insight into traditional Sherpa fashion.

Sherpa, from Shar “east” and Pa “people,” are an ethnic group from the most mountainous region of Nepal, high in the Himalayas. Globally, in the climbing and mountaineering communities,  Sherpa peopleare known for and relied on for their strength, skills and experience at all altitudes, including extremely high up.

Sherpa women are a good example of women’s empowerment. I believe being a Sherpa woman is not so easy. A woman has a more traditional duty to look after the household, her children and the wellbeing of the entire family. However, Sherpa women may climb mountains with many foreign climbers, and have a tendency to make the entire group feel more secure. They provide both motivation and positivity to the group as they would with their families.

Without Sherpa guides, porters and the Khumbu Ice doctors, most of the climbers would not be able to summit Mount Everest. Sherpas are the real backbone of any expedition. So, I feel honored to be a Sherpa and I appreciate my culture and my tradition very much. I am proud to tell you about both.

Our Sherpa men wear long-sleeved robes called kitycow, which end just below the knee. Tied around the waist, they wear a chhuba, with a cloth sash called a kara. This creates a pouch, or tolung, for carrying small items. Kho is similar to that worn by Tibetans.

Men and women wear a long inner shirt—called wan-ju for women and wan-tash for men—over a pant-like garment, both made out of wool. Over this, they wear a thick, coarse, wraparound robe (Bakhu, in Nepali).

Men and women wear high, woolen boots. The uppers of the boots are colored maroon, red and green or blue. The boots are tied on with colored garters. An unusual feature of women’s dress is the multicolored striped aprons worn to cover the front and back of the bodies below the waist.

Both married and unmarried women wear the rear apron (Gyaptil or Matil), while the front apron (pangden) is worn only by married women. This is one way to know if the girl is married or not. We also wear jewelry/ornaments (main front ornaments around the neck to chest, which is made up of gold, pearls and precious stones (Kaou), and earrings made of gold (Mendok Kogde) and a distinctive hat/cap (shya-mu), to complete the dress of the Sherpa woman. 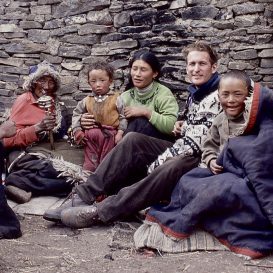 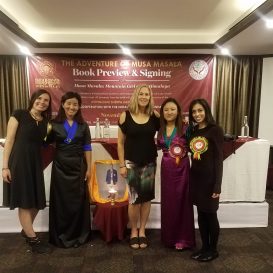 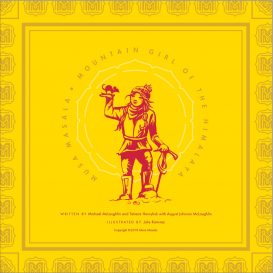 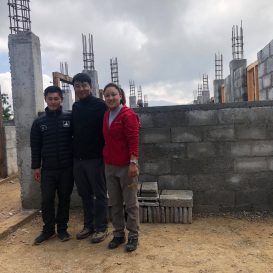