Traveling Solo: Lessons Learned From Loose Rocks in the Himalayas

We at Musa Masala are proud to enter for the second year the Beauty of a Woman BlogFest. Last year we had Lakpa Sherpa and her story of the creation of the Chyangba Girls Hostel, which allowed girls who lived far from the Chyangba School to have a safe place to stay so they could get an education. This year we have a friend of Musa, Tamar, with her story of taking her own fears and roadblocks and walking all over them as she treks to Everest Base Camp.

At Musa Masala we believe in getting out and expanding your horizons, helping those who may not normally get the chance to do just that. We believe in the beauty of the journey leading to the beauty within us, the beauty that comes alive when we challenge ourselves. Thanks Tamar for helping to show us the way.

To read more posts from The Beauty of a Woman BlogFest VII and potentially win a prize, visit this link through March 9th!

Ever since I was little I had issues with balance, walking into glass doors, walking into people, backing up into poles (yes on my driving test nonetheless) and the list goes on. All of this to illustrate what a major klutz I really am and how often my sight and balance have failed me. Perhaps that is a part of the reason I decided to make hiking a hobby a few years back. I needed to prove to myself that I could walk without falling or bumping into objects not just in NYC but also in the mountains. I didn’t realize that loose rocks would be involved and that I would fall even more on my hikes.

My friends tried to teach me different techniques along the way. One friend said “dig your heels in, ” another said “walk with confidence” one gave me a “one, two, three” technique, you look at the next three rocks and just skip through. Despite all of these strategies I have fallen many times: on ice, mud, in the river. I wasn’t sure if I was ready to fall on rocks.

I trudged along anyway and began hiking in the Catskills, NYC’s backyard. I even made it to some high peaks in the Adirondacks. I realized that being in nature helped me not only to overcome some fears, it pushed me to do things I would never have done otherwise, like walk across rocks upright instead of awkwardly using a crab walk.

My first overseas trekking experience was to Machu Picchu in Peru where there were many rocks but fortunately most were stable. It was a good trek to do at that point in my life, having just gone through a tough breakup, riddled with guilt and instability. I had forgotten my strength and had lost my core sense of self. I needed stable ground to help me feel grounded in my journey. I used poles too for extra support just in case (I felt extra wobbly at that time).  Although I fell often, I also learned how to make light of it. That trip to the Andes opened my horizons to the possibility of higher mountains.

Fast-forward two years and another breakup later and a trip to the Himalayas is booked and underway.  Everest here I come… actually Everest basecamp via three high passes here I come!

Well this trek was Machu Picchu on steroids. The passes were higher, the weather was colder and the rocks, the rocks moved whenever you stepped on them. So not only did I fall, I slipped all the time. Slipping I realized was a fun little preview to falling. I say fun but I really mean to say an annoying, heart stopping, tense instance that happened every fifteen minutes but without the grand finale of falling, until I did fall which always came when I least expected it. The other interesting part about slipping on rolling rocks is that they make a very dramatic sound, so every time I slipped my compassionate guide would turn immediately to make sure I was OK. Sometimes when he was behind me he would pull me back up by my backpack. It reached a point that our guide became my guide, as my trekking partner was not the slipping and falling kind. I realized after a few days that the attention I liked in the beginning turned to a hindrance. I needed more independence and a longer slack to be able to slip and fall and see if my muscles would work, which they didn’t for the most part. But I also realized I was able to pull myself back up almost all the time using my trusted poles and I needed to do that by myself.

Our guide did a good job at preparing us every night for the following day ahead. While sipping lemon ginger honey tea, he explained where we would be going, how long we would be trekking for and mostly that it would be “up and down up and down” and “a little easy a little hard.” That is now my life philosophy. Life is a series of ups and downs and it is “sometimes easy sometimes hard”. In order to walk through the trek our guide used a Sherpa term “cole cole” which translates to “slowly slowly.” As a fast paced New Yorker I am used to walking “fast fast” so slowing down was a new venture for me. However I welcomed it and it did decrease my falling probably by a whole 10%.

Because I whole-heartedly embraced “cole cole” our wise guide also reminded me to “jam jam” which is a Nepali term to “let’s go”. I feared “jam jam”. I needed to walk “slowly slowly” and sometimes hold our guide’s hand because that felt safe; especially when I found myself at the Khumbu Glacier, the mecca of loose rocks.

I learned that as fiercely independent as I’d like to think I am, sometimes I needed to accept help from more experienced trekkers and not to see myself as weaker for it. This discovery helped me successfully complete the most challenging hike I have ever embarked on. With a kind porter who intermittently glanced back to make sure I was still standing and our guide who was willing to pull me back up when I fell, I crossed Kongma la at 5535m, Cho-la and Renjo-la passes.

Have you felt the beauty of the journey open you up to new opportunities and experiences? Made you feel more comfortable going into unfamiliar situations and asking for help when you need it? We would love to hear your stories, Namaste. 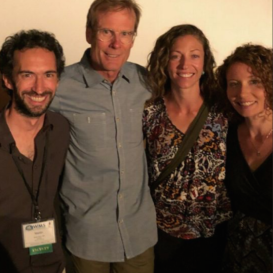 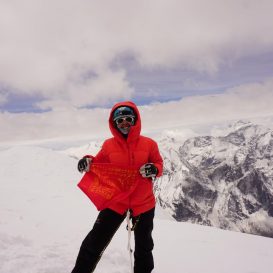 Our Book is Here! Musa Masala: Mountain Girl of the Himalaya
19 Comments

As a writer and editor, I appreciated the climbing/slipping metaphor for learning about balance in life; it is true that oftentimes losing a relationship does leave us feeling “unstable” and that we can learn about keeping our inner balance by practicing keeping out balance in other ways. Keep up the hiking and keep writing!

Thanks for that. We would like to think that these journeys we go on are always metaphors for our daily lives. It is what helps us with decision making, and giving perspective.

Incredible photos! I am loving the variety of posts this blogfest creates. Your determination and body positivity is inspiring. I also want to hike to Everest base camp, but do so “cole cole” as well.

The photos are awesome, Nepal is just that kind of place. If you plan to go to Everest Base Camp let us know, you can also find some great tips and info on our site.

This is an impressive and interesting blog post. I felt the Beauty of Nature within. Thanks a lot for sharing.

We think Tamar did an amazing job, great writing and it imparts the emotions and inspirations that so many people feel when they travel in Nepal. We are so happy she entered this!

Wow… I hadn’t realized it until now, but I miss hiking. And camping. And what awesome life lessons. You’re going to slip and fall. But you can get back up. You’re going to need help from those more knowledgeable, but it doesn’t make you weak. It makes you human. Physical resilience to remind us that we’re resilient imotionally as well…if we allow ourselves.

Oh to go “slowly, slowly” or “cole, cole,” not something I have done too frequently in my life but as you pointed out, it is a better trek when we do. Maybe then can we let go with assurance because we are going slowly, with awareness, even when we fall. I loved this post for many reasons but as a lifelong klutz, I empathize with the balance issue. I have brought it into my elder years but you know, I go “cole, cole” and find I go farther if not faster.

This is such an inspiring story. I love the idea of “slowly slowly.”

The most challenging hiking I have ever done has been in the Grand Canyon, once with a group organized by someone else and once on a trip I organized, for my 50th birthday. The experiences taught me a lot and have stayed with me. Maybe I’ll do it again to celebrate my 60th!

Such a lovely post, Tamar! I especially love that you learned that there’s strength in asking for help–something I think so many of us grapple with.

What an amazing journey, Tamar! I’m impressed with your independence and inspired by your recognition of when to ask for help. Thanks for sharing!

Thanks, that is what seems to make the journey so important, knowing when and how to ask for help, and directions!

Such a wonderful post. How each step ‘cole-cole’ changed the inner you as well is inspiring.
Thanks for sharing.

Wow, Tamar, what a trooper! So brave! I admire your perseverance. The photos are gorgeous and what amazing adventures you’ve been on. I thoroughly enjoyed this post.

I loved hearing of all your mountain adventures, there isn’t anything else quite like it!

For this woman born in the Adirondack foothills (hi, neighbor!), it was Mooney Falls in the Grand Canyon. I’m afraid of falling, but this guy I was dating said I had to see it.

Mooney Falls was named by the Havasupai Indians, who had a wicked sense of humor when a white man named Mooney toppled down this waterfall to his death.

I was all but certain I was going to join him. The last 60 feet need to be descended by putting feet into tiny ledges while clinging to chains driven into the rock with railroad spikes – for real!

I only made it because this guy put my booted feet into the footholds, and helped me down.

In one of the turquoise pools that followed, he proposed to me. Later, he helped me up again.

May you never have a fall you can’t rise from!

You go sister! What an incredible journey! I too am the slip and fall type, so I know how you feel 🙂 However, my version of hiking is Griffith Park. I would need 10 guides to make it up Machu Picchu and even then I’m not so sure lol